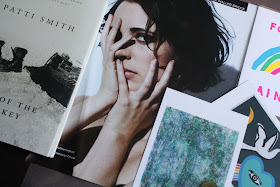 Hello and Happy October! As per usual I am over here marvelling the passage of time, don't ever consider turning that in to a drinking game future Sophie, if you are reading. This week actually ended up being rather busy somehow-lotta spontaneous hangs and the rest so I am only just blogging now, on a Saturday night. It was that or the rugby and come on, you know what I'd rather be doing. So five things for October. We have some stationery, socks, Phoebe Waller-Bridge, Patti and politics. Enjoy!

The Politician (Netflix): Where Ryan Murphy leads-theatrics and potential musical theatre numbers follow. And Jessica Lange, always Jessica Lange. Murphy's latest series, a Netflix exclusive focuses on a student body presidential election. Starring Ben Platt as Payton, the ambitious, extremely driven teen with Harvard and eventually the White House in his sights.  Lucy Boynton is also fantastic as Astrid Sloan, Payton's rival presidential candidate. The Politician also deals with topical issues for teenagers and young adults alike but never in a way that feels insensitive. As this is a Ryan Murphy show it brings the drama and hilarity in equal measure. I loved it. The costuming also didn't disappoint either. Where else will we see Gwyneth Paltrow in what can only be described as the kaftan to end all kaftans?

Olivia Purvis x Papier: One of my favourite pen-pals and blogging ladies Olivia, has only gone and collaborated with stationery gems Papier on her own exclusive collection. Cue me internally squealing with delight. Liv loves her stationery so I KNEW it was going to be a golden combination. There's pastel pinks, burnt oranges, gingham, Liv's signature doodles. It is dreamy I tell ya. So if you are in need of some beautiful notecards, notebooks or a dishy new diary for 2019, head here.

Patti Smith Newness: It's not really a secret to anyone that I lovelovelove Patti Smith's writing. Just like it's no secret to anyone I love Phoebe Waller-Bridge but I am getting ahead of myself. Patti has recently dropped two new books** full of her beautiful prose and imagery. Our shelves and minds are in for a treat. First up, we have Year of the Monkey. A rumination on 2016. She writes of stories and dreams. Recurring motifs. Facts melding with fiction. It is an exquisite slip of a book that will hypnotise you. She has also released Just Kids in an absolutely beautiful, illustrated format. Perfect for coffee tables or luxuriating over with said beverage in bed on Sunday mornings. The latter which I have been doing. I know some of you will balk at the mention of the festive season but both would make perfect gifts.

BCFNZ x Glassons: October is Breast Cancer Awareness month and Glassons have bought their designer collaborations back for a good cause. With a help from some of their friends like Twenty Seven Names and Shaaanxo to name a couple, they have released a range of scarves and socks. All proceeds go to the New Zealand Breast Cancer foundation and they are all super cute. My pick are these socks x Twenty Seven Names.

Fleabag & The Messy Woman: Could I go an entire post without mentioning PWB in some capacity? Probs not. Not even sorry about it. Madeleine perfectly articulates what it is about Fleabag and the messy woman that just makes them so endearing. As does Jia Tolentino in her essay about self-optimisation from Trick Mirror. Give Maddy's post a read here.

**Both these books were kindly sent to me for review by Bloomsbury but all thoughts and admiration for Patti Smith's word magic are my own.
nanawintour at 10/19/2019
Share