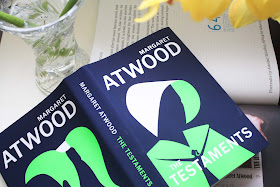 So I am a bit behind on the bandwagon but I only just read The Handmaid's Tale x Margaret Atwood this year. I know. What the heck. To be fair, I did start it and for whatever, unprecedented reason I shelved it and then revisited it in the week or so before its sequel was unleashed upon the world. And I am obsessed with the TV show now too. Anyway, getting ahead of myself here.

I avoided reading The Handmaid's Tale for a long time. Why? I think I was scared to. And not in a, I will have nightmares for days kind of sense. More the, this is going to seemingly remind me of real life and in an unnerving kind of way. Which it does. For a book that was first released in 1985, it was incredibly foretelling. Is Margaret Atwood psychic? Perhaps. What's interesting to note as well is that anything in The Handmaid's Tale, whether it be the book or TV series is based on something that has happened in reality. Yep.

Anyway, today we are here to talk about The Testaments*, one of the co-winners of this year's Booker Prize. Which excites me because Margaret Atwood is brilliant and I have loved everything of hers that I have read thus far-my backlist is long! The follow-up to The Handmaid's Tale set about to answer the questions of what happened to Offred and whether Gilead still exists. What that version of the world is like today. The book is split into three plotlines; Aunt Lydia (yes, she is back people), Daisy and Agnes. Daisy was smuggled out of Gilead as a baby and now lives in Toronto. Agnes is growing up inside Gilead.

I don't really want to expand upon the plotline beyond what I have already said because it will spoil things considerably for anyone who hasn't read it yet and I know how lame that is as a reader. What I will say though is this is a really satisfying read, the threads are all well-developed and presented. They all somewhat intertwine as well but *insert zipped lips emoji here*.

I thoroughly enjoyed The Testaments. It was an incredibly satisfying read and as a newfound fan of The Handmaid's Tale, it further cemented why that book is one of my all-time favourites now. Even if I am late to the party. It's fast paced, suspenseful, and unputdownable. No really, I had many a late night reading this and I don't regret a single second of it.

The Testament's is available now from bookstores far and wide. Let's hope we women never lose the luxury of reading, as is the case in Gilead. Okay, maybe THAT is one nightmare I have had before.

-Have you read The Testaments? What did you think of it?